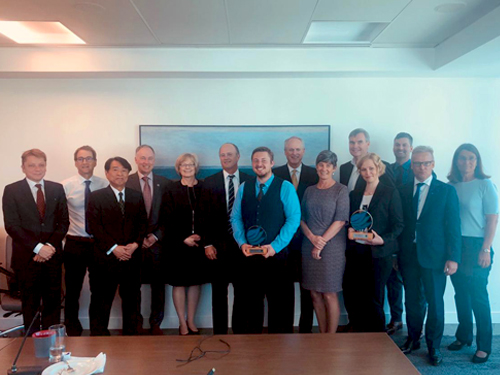 The International Council of Forest and Paper Associations (ICFPA) has announced the three global winners of the 2018-2019 Blue Sky Young Researchers and Innovation Award. Elina Pääkkönen (Finland), Martin Wierzbicki (South Africa) and Chinmay Satam (USA) were lauded for their novel wood-based research projects after they made their official presentations in Vancouver, Canada to industry executives at the ICFPA-hosted international CEO Roundtable, a biennial gathering of forestry and forest product companies.

The international competition – now its second round – aims to attract submissions from aspiring scientists and young engineers who are developing novel solutions using wood fibre, process improvements or other products along the forestry-pulp-paper value chain.

The research projects were judged against the theme of disruptive technologies that can revolutionise the future of forest-based products and services. The 2018/2019 contest invited submissions in two particular areas: future generation forestry and innovation in the wood-based industry. These issues are particularly topical as the world seeks greener, sustainable and renewable alternatives to packaging, fuel and materials.

Pääkkönen, Satam and Wierzbicki inspired Steve Voorhees, CEO of WestRock. “We recognize them for their many years of work to develop these exciting renewable wood and paper-based solutions,” said Voorhees.

Foam cushioning made from renewable fibres?

The objective of the work is to develop a viable earth-friendly packaging material from wood fibres using foam-assisted forming technology. “This is much like a common polystyrene foam cushioning, but made from common papermaking pulps,” explained Pääkkönen.

The process involves mechanically mixing fibres, water and a foaming agent resulting in an aqueous fibre-containing foam with an air bubble content between 50-70%. These foam-formed fibre products are based on a 100% renewable material –  wood fibres or even recycled paper fibres – and can be recycled or composted in the same way as cardboard packaging. Another advantage is that companies already have the machinery and expertise with which to produce this material.

Martin Wierzbicki, an MSc graduate from University of Pretoria in South Africa carried out research ongenome-based biotechnology for designer wood.

Wierzbicki’s work has focused on how the genetic makeup of trees can be changed to improve how wood reacts to industrial processing in order to maximise the extraction of biopolymers such as cellulose, lignin and xylan (a complex sugar found in plant cells). Separating wood components into distinct processing streams as cleanly as possible allows each component to be used to make high value products, but is hampered by the strong associations between wood biopolymers that make industrial breakdown difficult and costly.

“I have combined genetics, genomics, big data and wood chemistry analyses to build a gene network model,” he explained. “My model treats the tree as a ‘living biorefinery’, where we have control of how the wood is made.”

He hopes that his work will help companies to improve breeding techniques to reduce the loss of valuable components during wood processing and to introduce novel properties for advanced biomaterial production in trees.

Compostable and recyclable packaging barrier made from cellulose and crab shells

Chinmay Satam, a PhD chemical engineering candidate at the Georgia Institute of Technology in the USA, is developing multi-layer films made from chitin nanofibre and cellulose nanocrystals for sustainable barrier applications to replace commonly used plastic barriers such as polyethylene terephthalate (PET).

Oxygen and water barriers are very important, especially in food packaging and electronic applications, but these tend to be petrochemical derived and non-renewable. Satam has been exploring the potential of biomaterials and developing a cost-competitive, compostable, recyclable and renewable material.

Like cellulose (found in plant cell walls), chitin is an abundantly occurring substance found in the exoskeletons of crabs, insects and spiders, as well as the cell walls of fungi. “Chitin and cellulose are known to be excellent oxygen barriers but not as effective against water,” said Satam, “however by combining tiny chitin nanofibres and cellulose nanocrystals with a cheap renewable polymer with good water vapour barrier properties like polylactic acid, I have developed a composite that yields the best of both.” His focus now lies in process development to bring the production of these materials to pulp mills.

Each country association hosted a regional round calling upon young researchers to showcase their work. After being put through a local adjudication process, countries submitted their top contenders for the global round.

“The jury unanimously praised the quality of the submissions but had the difficult duty of selecting the winners from 13 strong entries from around the world,” said Bernard de Galembert, Innovation and Bioeconomy Director at the Confederation of European Paper Industries (CEPI), who led the competition process.

A diverse jury of prominent experts from the United Nations Food and Agriculture Organisation (FAO), the International Union of Forest Research Organisations (IUFRO), forest-based company Metsä Spring and research institutes from New Zealand and Canada evaluated the submissions against several criteria: compliance with the overall theme, level of innovation, quality of the abstract, clarity of the results, capacity to solve industry challenges and ambitions as well as probability of implementation and upscaling.

ABOUT ICFPA: Established in 2002, the ICFPA serves as a forum for global dialogue, co-ordination and co-operation among 18 pulp, paper, wood and forest fibre-based associations that encompass 28 countries. The ICFPA’s member associations represent the leading pulp, paper and wood producers around the world. For more information about the global forest and paper industry, visit icfpa.org.