Time for the bioeconomy 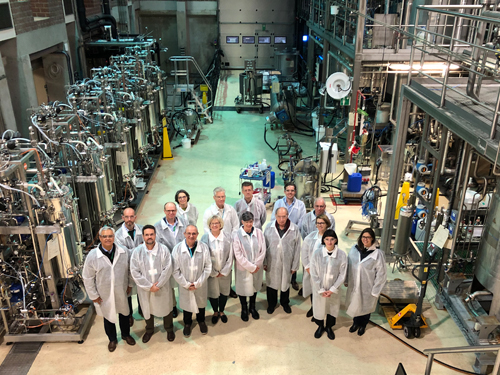 Using fossil-source raw materials, greenhouse gas emissions, climate change, natural disasters... We need to overcome the vicious circle of this necroeconomy that endangers our future. However, change is not enough: a revolution is necessary. We need to transform the way we do business, consume, build.... the very way we live. It is high time we moved into the virtuous circle of the bioeconomy.

As part of this challenge, institutions (national governments, multilateral organizations, corporations, companies, NGOs, and other players in society, such as academia) need to step up the pace so they will not be knocked out of the way by the changes that are already in the works. There is no more place for individual or disjointed efforts; the world urgently needs practical results, and only joint mobilization can guarantee a future for our planet.

I was recently in Belgium, where I visited the Vlaams Instituut voor Biotechnologie (the Flanders Institute of Biotechnology), which is located near the border with Holland. This organization constructed a very interesting system of governance which brings together different actors in society around innovation founded on the concept of the bioeconomy. It receives government funding, but works in partnership with companies and five universities, with 51 million euros in investments between 2017 and 2021.

In Ghent, also in Belgium, I visited the Bio Base Europe Pilot Plant, a biorefinery which is another example to be followed. This space is the product of investment by local government, and is available to companies and academia for researching and developing solutions that focus on using biological waste as a substitute for raw materials that harm the environment.

This hi-tech biorefinery has already hosted over 120 companies from Europe, Asia, and the Americas that have investigated or developed innovative and fundamental solutions. The lab has produced biochemicals, bioadhesives, cosmetics, solvents, food and medication ingredients, along with a plethora of other items that will soon be part of our everyday lives, helping in the migration to the bioeconomy. Without a corporate entity behind the Bio Base Europe Pilot Plant, companies feel comfortable working on their own projects, secure in the knowledge that they have the privacy needed to advance their research and obtain results.

There is no lack of potential in Brazil, and there are many advances to be made. Here there are capacities and cases which demonstrate that we can dive deep into the world of the bioeconomy and take a leading role on this issue.

When the subject is biomass, the opportunities are even greater. The domestic forest sector is a reference in trees cultivated for industrial purposes, and the byproducts of these trees are extremely valuable. The circular economy is already part of the production process in this segment; stumps, branches, and other waste is already used to generate energy, for example. And recycling is very strong in the paper industry.

Now is the perfect time. The younger generations are more connected to sustainability, aware of the role they play and the need to guarantee a future for humankind. These young people are defining new consumption standards, with requirements that will become the new normal: fewer products made from plastic and fossil sources in general, with specific characteristics such as recyclability, renewability, and composting, and a circular vision of the economy and decreasing acceptance of single-use products.

The COP25 summit in Madrid is a good snapshot of our current situation. It was not held in Brazil or Chile, and it was up to Spain to race against the clock so the conference would not be completely irrelevant with regard to its concrete results. Meanwhile, the central aspects of implementing the Paris Accord, particularly approval of Article 6 (the market for carbon credits) remained in a gridlock.

The fact is that the logic of multilateral negotiations such as the UN summits on climate change runs contrary to any notion of urgency because of the nature and scale of these processes.

In Brazil, we still need to sit down and strategically consider these topics which are so important to our future. There is no problem with looking beyond our borders and getting inspiration.

Along these lines, in Madrid the European Union published a document entitled The European Green Deal, with guidelines for making this region carbon-neutral by 2050. Until recently, China was a case study in environmental degradation. Today, it is on the way to becoming a success story: its major cities no longer have the unbreathable air they were once known for, and the country’s public transport system is rapidly incorporating electrical power... In the United States, which has circumstantially distanced itself from the global debates on the low-carbon economy, California provides an example as it reconverted its own power grids.

Brazil is an environmental power, and on our own merits we are predestined to take an active role. Our challenge is to reconnect in a collective mobilization in order to face and overcome unacceptable problems in areas that are critical to human dignity, such as education and basic sanitation, which are still present as we move into the third decade of the twenty-first century.

What is essential right now is a careful vision that truly focuses on a sustainable future for the planet, which involves promoting and respecting the path our civilization will follow toward the circular economy and bioeconomy. Here, I speak directly of the survival of all of us. For this reason, we need to move away from discourse that is belittled by backwards, ideological biases and move toward working in cooperative networks in order to reinvent the ways we inhabit the Earth. We no longer can hesitate. Our future depends on this moment.

This article was published in the O Estado de S. Paulo